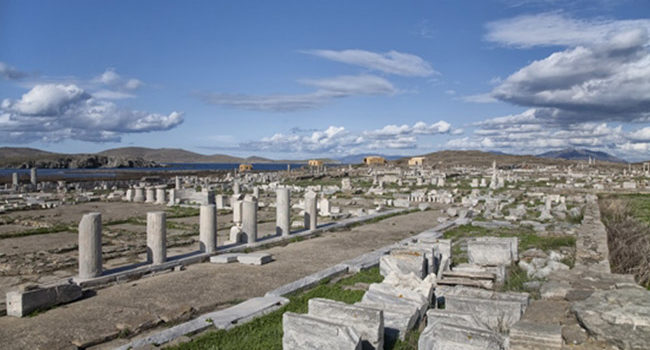 Delos is the Sacred Island of the Ancient Greeks, which according to mythology, was revealed among the waves of the Aegean to Leto, who was being chased by the jealous Hero; it was the refuge where she gave birth to Apollo and Artemis.
On Delos are found the admirably well-preserved ruins of one of the largest, most significant, and best- organized ancient Greek settlements. The island was first settled, probably by the Kares, about the 3rd millennium B.C. In the beginning of the 8th cent. B.C. it developed into a center of worship and was the capital city of an amphictyony of Aegean island.
At the end of the 6th cent B.C., the tendency of the Athenians was to take over the island: IN 540 B.C. Peisistratos ordered the first purification of the sanctuary. As a result of the second purification (426 B.C.) the entire contents of all the islands graves were remove to neighboring Rhenia.
The Athenians consecrated the first “Delia” dedicated to Leto, Artemis, and Apollo. In 315 B.C., when Macedonians arrived on the island, Delos achieved its independence and developed commercially.
During the Roman period, the island thrived, until, until 88 B.C.; the population included Egyptians, Syrians and Italians. Then, after two dreadful attacks during the Mithridatic War, Delos went into decline and was finally abandoned in the 6th cent A.D.
Archaeological Site of Delos:  Summer: (1th of April till 31st of Αυgust 2017) 08:00-20:00, Monday to Sunday
Archaeological Museum of Delos: Tuesday, Wednesday, Thursday, Friday, Sunday: 08:00-19:00 and Saturday, Monday: 08:00-15:00