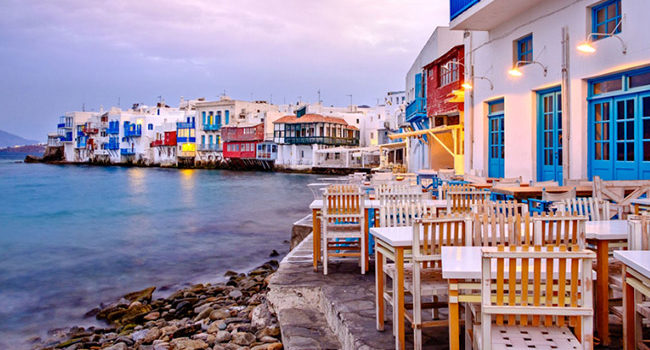 According classical mythology, the Giants killed by Hercules in a fierce battle, are buried on the island under imposing blocks of mykonian granite. The name “Mykonos”, somewhat pejoratively, means a mass of stones’ or a rocky place; a later tradition attributes the name of the island to a hero by the name of Mykonos, the son of the king of Delos, Anios, who was the son of Appolon and nymphe Rhoio- a descendent of Dionysus.

The Kares and Phoenicians may have been the first inhabitants of Mykonos, but Ionians from Athens were established colonists and in control of the island by around 1000 B.C, having expelled the previous occupants. Historical sources confirm the following: in ancient times there were two towns on the island; in 490B.C, the Persian generals Datis and Artaphernes made a brief stopover in Mykonos; It was a poor island with limited agricultural resources. In ancient, pantheistic times, Dionysos, Demetra, Zeus, Appolon, Poseidon and Heracles were the principle gods worshiped here. Later in history the island belonged to the Romans and subsequently to the Byzantines, who have fortified the island against the Arab raids of the 7th century, kept control of it until the 12th century.

After the fall of Constantinople, at the end of the 4th Crusade (1204), the island was occupied, as their seigneur (stronghold) by Andrea and Jeremia Ghisi – relatives of Dandolo, the Doge of Venice. In 1292 it was looted and pillage by the Catalans, and, subsequently, in 1390, given over to the Venetians, in 1390, by the last of the Ghizi overlord. In 1537, while still under Venetian domination, the island suffered a catastrophic attack by Barbarossa, the admiral of Souleiman the Magnificent.

Later, under Kapudan Pasha, the head of the Ottoman fleet the island is practically self-governed, according to the system of the period, by a functionary called a “voivode” and a council (body of “syndics”) who always tried to maintain an equal distance from both Turks and Venetians (the last of whom withdrew definitively from the region, in 1718, after the fall of the castle of Tinos to the Ottomans).